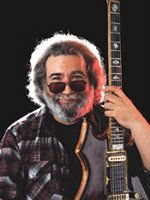 I think this review actually ties in with Assam Month, which is going on for all of March here at Tea Guy Speaks. Bear with me and I'll explain.

Republic of Tea recently released the J. Garcia (as in Jerry Garcia, of the Grateful Dead) line of artisan teas - a total of five in all. I previously wrote about them here.

The fine folks over at Republic were kind enough to part with samples of Morning Brew and Jerry Cherry, so here we go. As for that Assam thing, since they both are made with "organic black tea from India" and since they have a distinctly Assam-like flavor that's close enough for me.

The packaging on these is up to Republic's usual high standards and Garcia - whose artwork is displayed on the canisters - was obviously no slouch in the visual arts department. The tea is packaged 50 bags to a canister and they are Republic's nifty little round tea bags. If you're gonna do tea bags you could do a lot worse.

As for the tea itself I found that they actually tasted quite similar. I suspect that they use pretty much the same basic blend, with cherry and vanilla flavors added to the Jerry Cherry, but I didn't confirm this with the company. Both teas were actually quite good, with the Jerry Cherry being rather subtly flavored. That, in my opinion, is a good thing, but your mileage may vary.

I think the only reason I wasn't a little more effusive over these samples is that I've been trying some truly top-notch Assam tea lately - almost to the exclusion of anything else. Though those two varieties don't reach such exalted heights it's probably not fair to even make such a comparison.

Recommended on both counts.