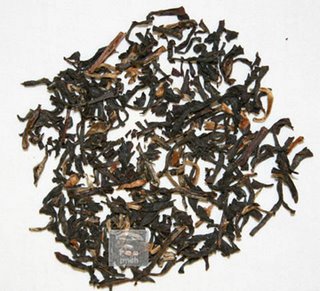 As luck would have it, I recently found myself with samples of Assam Sessa Estate from two tea merchants. That's luck, as in good luck, but we'll get to that in a minute.

When I decided to devote a month to Assam tea I ordered samples from Upton's Web site. With sixty to choose from, I admit that I was a overwhelmed. So I sorted them by price and picked out ten samples from across the range. Not long after, the fine people at Tea Smith (yes, Virginia, there is good tea in Nebraska) were kind enough to contribute a few samples for Assam Month. Lo and behold, there was a bag of Sessa.

Upton's Sessa is near the low end of the price range and Tea Smith's is also rather affordable. As a general rule, I think we're conditioned that we're going to get what we pay for. Therefore I didn't expect these samples to be anything special. But once again I've found that there is not always a correlation between price and taste (though sometimes that's true). Granted, the Sessa was not up there with some of the better Assams I've tasted - the Singlijan I reviewed here and the Khagorijan that I'll be reviewing soon - but it's not so shabby either.

I was curious to see if the two samples tasted any different and they didn't, though we could check that up to my relatively unsophisticated palate. Both have relatively large leaves and a lot of nice golden tips. Upton suggest trying theirs without milk - always my preference - and say that it "combines a sweet maltiness with a delightful floral note." It may be the untrained palate talking again, but I didn't really catch the latter. I did notice that both tended toward bitterness when oversteeped even a little, something that I've found that a lot Assams tend to be more forgiving of.

But, all in all, these are both good teas, especially given the price. Not quite the top of the heap, but recommended nonetheless.

i had some Sessa, and it didnt really taste assamy... very low maltiness...and yes- bitter if overstoop.
i dont know why they classify it as assam.