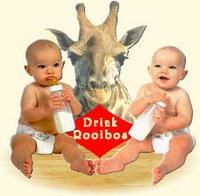 Nowadays Africa, and South Africa in particular, is probably best known for it's Rooibos and honeybush "teas", herbal varieties which, to my taste, are quite similar.

But let's not forget that "real" tea is also grown in several African countries, including Kenya, Malawi and Zimbabwe. The latter country also generates some especially fine Afropop, but I digress.

For a good one-stop source for information and shopping for African teas and whatnot you might want to check out the AfricanTea Company. They offer products from all of Africa's tea-growing regions, with shipping rates that appear to be fairly reasonable. According to their Web site Africa is an area that accounts for 25% of the world's total production of tea.