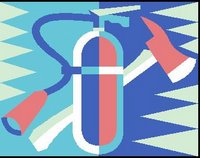 Tea, being a beverage that is frequently consumed hot, is occasionally called upon to do dual duty as a weapon. South Africa's News 24 reported on such an incident recently, in which an 81-year-old woman doused an intruder with a boiling hot pot of brewing tea.

From the Tea Drinker As Hero department, here's the story of a Scottish bus driver on his tea break whose quick thinking saved a nearby laundromat from possible destruction by fire.

For more on tea-drinking heroes refer back to this piece, posted here about a week ago.