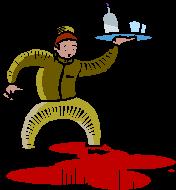 A spot of controversy recently arose on the other side of the pond. As the story - reported in Ananova and elsewhere - goes, the tea lady at the East Herts Council's offices in Bishop's Stortford was sacked (as they say over there).

Injuries have apparently escalated due to employees having to walk around carrying their own hot tea. Then, to add insult to injury, the powers-that-be hired consultants at the rate of £200-a-day to advise on how to make tea-drinking in the office a safer activity.

Or something like that. I think I've got it straight, but I'm not completely sure. Anyway, it all sounds like quite a tempest in a teapot to me, but if you want to peruse the Ananova report for yourself, it's right here.

While we're on the subject of Britain, here's an article about a county that's been awarded Fairtrade status, partly due to it's policies regarding tea. For more on exactly what the Fairtrade movement is all about, look here.

Last, but not least, is this report from icWales that alleges that "the great British cuppa is making a comeback".