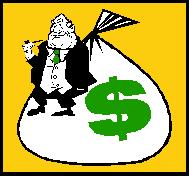 In an article on money management tips for recent grads, the New York Times mentioned the Stop Buying Expensive Coffee and Save Calculator, which is available here. The point of this gadget is to help you figure out how much you'll save by cutting out Starbucks or other "ready-made" coffees and making do with home or office brewed.

Which doesn't exactly have anything to do with tea, though the calculator can be used to the same purpose by anyone who buys their tea away from home.

But all this got me to thinking, as I often do, that even if you see tea that appears to be rather expensive, that may not actually be the case.

Since Adagio Teas is a vendor that actually does the math for you, let's use them as an example. Adagio's most expensive white tea - Silver Needle - currently retails at $14 for two ounces. That ain't cheap, but, as the company points out, it breaks down to 56 cents a cup. That number would be reduced even further if you make multiple infusions from the same leaves, as many tea drinkers do.

If you are going out for tea, I defy you to get a decent cup for 56 cents. Ain't gonna happen, friends.

The moral of the story - drink the most expensive tea you can afford. You'll notice the difference and it may not be as expensive as you think.